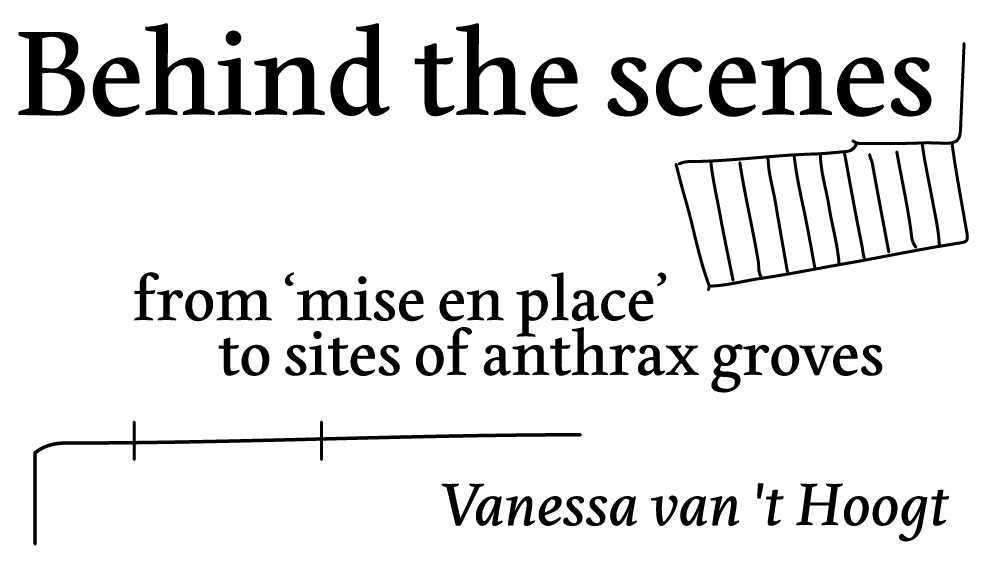 This website Behind the scenes gives an insight in Janne van Gilst’s process of making, in equipping her temporary workspaces during the artist residency at Kunsthuis SYB and in the final window-exhibition Miltvuurbosjes. During her residency (1 February till 14 March 2021) Janne collected information about the sites of anthrax groves (in Dutch: miltvuurbosjes, hence the exhibition title), the locations of which are only stored in the ‘local memory’ of Frisians. After placing a call for information in local media, Janne received countless suggestions of locations of anthrax groves near Beetsterzwaag. She captured these sites with her analogue camera and developed and printed the negatives in her self-built darkrooms in Kunsthuis SYB using the 19th century photographic technique, Cyanotype.

Behind the scenes enables you to wander around Janne’s temporary workspaces located on all three floors of Kunsthuis SYB. Furthermore, you get the chance to visit the window exhibition with which Janne finished her residency. The floor plans are the foundation for your exploration: zoom in on different parts of the spaces to get information about the process of making: her making hands, the materials / tools / techniques used, the furnishing of the self-built dark rooms as well as the exhibited works of art.

Learning to master a new technique, such as Cyanotype, takes time and can be a challenging task. Arranging and furnishing a workspace according to this technique is even more time-consuming and not a straightforward process. Photographer Janne van Gilst only recently endeavoured to deepen her knowledge about 19th century photographic techniques, such as Cyanotype or kallitype, because she really wanted to work with her hands again. In the workspace of Polychrome run by photographer and designer Kees van Brandenburg, Janne learned about these techniques in a workshop by the latter. During her residency at SYB she could apply the knowledge she had gained (e.g., in the form of written instructions made by van Brandenburg) and could benefit from his literary recommendations (e.g. the book Cyanotype: The Blueprint in Contemporary Practice (2019) by Christina Z. Anderson). During her residency, she also took a dark room workshop given by local analogue photographer Arjen Verschoor. She was not only able to learn more about the dark room from him, but could also borrow necessary equipment, such as a developing tank.

How much a workspace arranged and furnished by a specialist contributes to the process of learning and making, becomes especially visible when you must organize your workspace by yourself. Professor Roger Kneebone argues in Expert. Understanding the way to Mastery (2020):

As a beginner, it’s easy to focus on individual tasks without noticing how your workplace is structured. By fitting in a way of working that is already there, you can overlook the importance of your environment. 1
Borrowing from the culinary world, Kneebone introduces the concept of ‘mise en place’ to emphasize the significance of our environment as well as how we organize and interact with our surroundings. He clarifies that the French expression ‘mise en place’, meaning ‘organizing your workspace’, is not just for the kitchen. Using the relatable example of driving in an unfamiliar car, he explains that it takes time to adjust to an unfamiliar ‘mise en place’:

Anyone who’s driven a hired car will know how easy it is to find you’ve turned on the windscreen wipers instead of indicating a turn. 2
It is also very time-consuming to become familiar with tools and materials, your environment, in such a way that you are able to arrange your workspace in a way that makes sense for you.

Arriving at SYB in February 2021, Janne was confronted with the importance of an appropriate working environment when she was faced with the task of organizing her workspace. Obviously the technique including materials and tools used, in this case Cyanotype, would determine the way in which Janne needed to structure the workspaces. She started with furnishing the dark room in the exhibition space on the ground floor. On this floor, there is a small space, which is a reminiscence of the history of the location. She used black agricultural plastic and duct tape to reduce the light in the self-built dark room to a minimum. After finishing this task and furnishing the space, she realized that this environment was impractical because of its lack of access to running water. Her attempt to utilize a watering can was ineffective and she knew that she had to relocate the dark room to a space where running water would be a certainty: the bathroom on the second floor.

Again, Janne used duct tape to light proof the door frame to prevent the last bit of light from coming in. She then furnished the space in such a way that she could not only develop the negatives in the developing tank (depending on darkness), but also develop the resulting Cyanotypes. A wooden board found on site covered with agricultural plastics enabled her to create a workspace on top of the sink. She also covered the toilet and parts of the floor with this plastic to be able to easily clean up the space and prevent the tiles and ceramics from the chemicals. A washing line was installed to function as a place in the shower where the developed negatives could hang to dry.

Literally and figuratively in-between the ‘dry dark room’, as she later labelled the space on the ground floor, and the much more practical ‘wet dark room’ on the second floor, Janne arranged the ‘digital dark room’ in the living room on the first floor. Here she was able to scan the developed and dried negatives (including preparation such as dusting), and to process the scanned negatives for printing large scale negatives on specific paper with a particular printer. She would need these printed negatives on the second floor, to imprint the negative image of the anthrax groves on the prepared paper. She had prepared the paper in the dry dark room downstairs, applying the chemical emulsion onto the paper with a brush and leaving it to dry. Once these were dry, Janne took them upstairs in a light-proof folder. After all preparations, Janne could finally print the Cyanotypes: back on the second floor, she placed the self-built UV lightbox, which is necessary for imprinting the image, on top of the washing machine and appropriated it as a work surface. In the shower, chemicals were rinsed off the paper and the results were hung to dry on the laundry rack with clothes-pegs.

Janne’s journey of arranging and furnishing her workspaces in Kunsthuis SYB to be able to develop Cyanotypes – from dry to wet dark room via the digital dark room – illustrates how time-consuming it is to develop ‘mise en place’ or in the words of Kneebone:
[to] tak[e] control of your environment.3
Janne’s ‘mise en place’ of the three dark rooms, can, next to the final exhibition Miltvuurbosjes, be further investigated on this website.

Until the 19th century, cattle infected with anthrax were often buried in the farthest corner of the territory. A ditch or fence was placed around the burial ground to prevent healthy cattle from spreading the disease. These anthrax groves remain dangerous because the anthrax bacteria can survive underground for centuries. The locations of the groves have never been documented but have been passed down from generation to generation within the farming community. Locals know that these groves are dangerous, but often they no longer know why. What remains are mysterious small islands of untouched nature, where no human has been for centuries. Janne intentionally used the 19th century photographic technique Cyanotype to capture these ‘islands’ because the resulting blueprints slowly fade, just like the registration and meaning of the anthrax groves: as time passes, these sites will be disregarded, deform, or eventually disappear.

In her final window exhibition, Janne presented, next to the resulting Cyanotypes of the anthrax groves, audio-fragments of interviews which she conducted with locals and experts regarding these sites and their history. Furthermore, she displayed a slideshow of close-ups of the groves, which offer yet another perspective of these hazardous sites. You can look at the Cyanotypes and the slide show and listen to the fragments on this website. For the online version of the window exhibition Miltvuurbosjes, Janne decided to add the locations of the anthrax groves to the Cyanotypes in question. Adding the locations to the digital version of the otherwise fading Cyanotypes, contributes to documentation and recollection of these still dangerous sites outside the local farming community.


This website, Behind the scenes, generates knowledge about Janne’s workspaces (‘mise en place’) and process of making. You can indirectly experience the process of making a Cyanotype, which we hope you will enjoy. Even though you are sitting still in front of your computer, we invite you to feel like you are participating in the movement you observe in the still and moving images (kinaesthetic empathy).5 When capturing and selecting the arrangement of the workspace and the process of making, Janne and I, Vanessa van ‘t Hoogt, had to make countless decisions based on varying criteria, ranging from the aesthetics of the image to practical issues such as avoiding repetition. Therefore, belonging to the mediated genre of showing making this website showcases some but hides other elements of the process of making. For example, in several images you can discern the chemicals used, but not see Janne preparing them and filling them in the designated brown bottles.6

We, Janne van Gilst, Michiel Teeuw and Vanessa van ‘t Hoogt, hope you have as much pleasure exploring Behind the scenes as we had making this website – a process itself worthy of being showcased (but we leave that for another website).